The scope of honey fraud is enormous.  Demand for honey has doubled in the U.S. in the past 25 years, but production has not kept up. The increase in demand for honey has coincided with a critical decline in honey bee populations globally.    So to keep consumers’ honey pots full with cheap honey, producers have increasingly cut honey with cheaper substances like corn syrup.

As adulterated honey takes over the mass market, beekeepers and legitimate honey producers cannot recoup their expenses by selling pure honey and are going out of business.  The loss of these businesses has dire consequences for our declining honeybee population, which in turn has repercussions far beyond honey production.

Those trying to solve these two problems—honey market fraud and the loss of bee populations—must recognize that they are inextricably linked.  The failure to do so may be catastrophic. This is because the decline in honey production is the least of our worries when it comes to declining honeybee populations; the consequences of reduced pollination are far worse.  Three out of four fruit or seed crops need pollinators to continue producing, and the loss of bees has led to what some see as a pollination crisis.

But this linkage has not been effectively addressed by policymakers. One reason is that the declining honeybee population is seen as an environmental problem, while fraud is an economic one, and these problems are addressed by different federal agencies.  Notably, a 2014 effort by the White House to address the pollination crisis did not include the FDA, the only agency with the authority to address honey adulteration.  Moreover, the FDA’s approach to honey fraud has been anemic.  It focuses on labeling rather than stronger action like setting out a specific formula or method of production for honey.

Michael T. Roberts, Executive Director of the Resnick Center for Food Law and Policy at UCLA Law School, has published a white paper with the support of the American Honeybee Producers Association that identified an approach to stopping honey fraud while also saving the honeybee.

First, federal agencies—including the FDA, the USDA, and the EPA— must work together to adopt food-systems thinking with the twin goals of addressing pollination and honey production.  If the White House fails to order coordination among these entities, Congress should legislate this coordination.  And regardless of whether the White House or Congress act, the FDA should take immediate action against honey fraud.  Next, retailers should work with the American Honey Producers Association to develop strategies to address honey fraud and to save pollinators.  For example, in the absence of governmental standards, retailers should consider creating private standards in the supply chain to counter fraud.

Moreover, all the stakeholders in this pollinator economy—including regulators, retailers, and beekeepers—must educate the consumer on the value of unadulterated honey.

Currently, there are overwhelming incentives and an absence of consequences for food manufacturers to engage in honey fraud, and this takes a vast toll on consumers, the legitimate honey producer, and pollinators.  To fix this, we must make the connection between healthy pollinator populations and pure, authentic honey as clear to everyone as it is to beekeepers and legitimate honey producers. 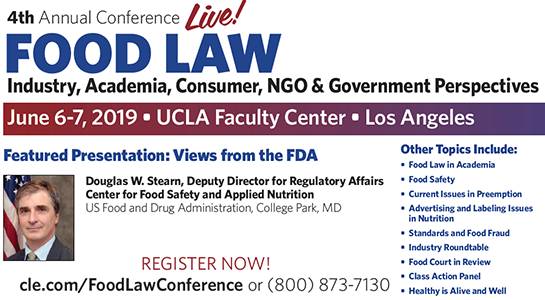 The Resnick Center is collaborating with CLE International to present the fourth annual Food Law Conference at the UCLA Faculty Center on June 6 and 7, 2019.  This conference brings together an amazing group of practitioners, regulators, academics, and stakeholders to present on numerous important food law topics, including standards and food fraud, preemption, and class actions.  You can find the full brochure with a schedule of events here, and you can register here.

On February 23, 2019, the Resnick Center for Food Law and the UCLA Animal Law and Policy Program hosted a one-day conference at UCLA Law titled, “Public Values in Conflict with Animal Agribusiness Practices.” The conference featured three panels about subjects relevant to closing the gap between public values and animal agribusiness practices. These three panels addressed  the role and utility of undercover investigations, production method issues and consumer perceptions of labels, and private agreements with corporations as a way to improve business practices that affect workers and animals and to reduce animal products.